Dakota Fanning...on the edge of fame

In August of 2000, I co-produced a short film titled “Father Christmas” with a director who received a grant from the American Film Institute. The film starred two children. Six-year-old Dakota Fanning walked into the audition and out shined every child actor we had seen. Immediately, we knew we had found our talent and the next child star.
Dakota had begged her mother to bring her out to LA that summer to audition for acting roles. Dakota had not landed any roles so her mother and she were returning to Atlanta to begin the school year. Their plans to leave and lives completely changed when we cast her. Using the film we shot, Dakota immediately landed a top talent agent and never returned to Atlanta. Within two months, she had landed a starring role in the movie “I Am Sam” featuring Sean Penn.

The above film clip features two scenes from the short film. I purposely chose non-speaking clips because Dakota’s talent so surpassed the other talent that it is distracting to watch. 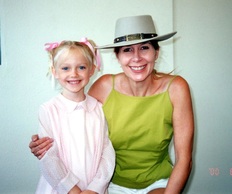